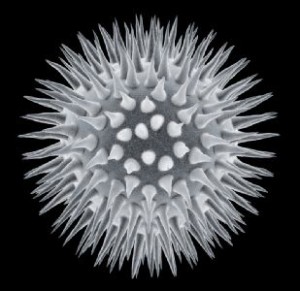 A mold is a type of fungus:  a microbial plant-like organism that does not use photosynthesis to produce food, instead obtains it food directly from its surroundings. There are thousands of known species of mold. It is estimated there are equally as many species yet to be identified.

Mold spores are microscopic (2-10 u m) and are naturally present in both indoor and outdoor air. Molds reproduce by means of spores.

Some molds have spores that are easily disturbed and waft into the air and settle repeatedly with each disturbance. Other molds have sticky spores that will cling to surfaces and are dislodged by brushing against them or by other direct contact. Spores may remain able to grow for years after they are produced. In addition, whether or not the spores are alive, the allergens in and on them may remain allergenic for years.

Molds can present in a variety of colors, including the familiar green commonly found on bread or fruit.  The main part of the fungus consists of a network of thin, transparent filaments known as hyphae.

The combined mass of these multi-cellular tubular branching hyphae are called a mycelium, and are considered a single organism. The hyphae are generally transparent, so the mycelium appears as very fine, fluffy white threads over the surface.   The fuzzy or dusty texture of many molds is the result of profuse numbers of spore conidia formed at the ends of hyphae. The mode of formation and shape of these spores is often used to identify the species of mold. Often these fungi spores are colored, making the fungus more visible to the naked human eye, at this stage in its life-cycle.  In contrast, single cell fungi are called yeasts.

Mold is one of the principle agents responsible for the natural recycling of dead plant and animal life.

A study by the University of Arizona, observed 160 homes in all regions of the United States found the presence of mold in all 160 homes. The highest levels were found in places that people normally overlook including window sills, refrigerator seals, under the kitchen sink, air registers and entryways.